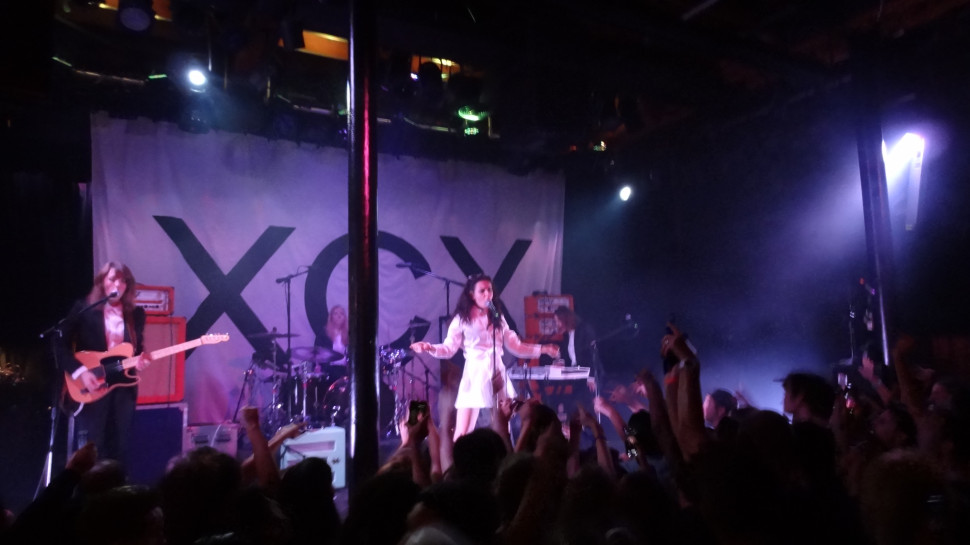 Whether or not mastery comes with 10,000 hours of practice, spending years writing songs and performing will make you good no matter what. Exhibit A: Charli XCX. At 14, Charli XCX started writing nursery rhyme rap songs about dinosaur sex. Now at 21, she can fart out the hits in her sleep (see: “I Want It”, “You Lied (Ha Ha Ha)”, “Nuclear Seasons”) and it’s likely they all smell like “Black Roses”. Ba dum bump. And live, she backs these hits up with a strong, energetic stage presence and a real connection with her fans and audience.

At Slim’s in San Francisco, Charli XCX strolled out on stage in an all-white outfit and 1950’s white-rimmed sunglasses. Starting off with “What I Like”, she gets the crowd going with her hip-shaking and fist and arm thrusting. Very big movements, which makes me wonder, these singers like Charli XCX and Chloe from the opening band Kitten (who seems to be close friends with XCX) probably took drama classes in high school. Imagining them in West Side Story isn’t a stretch.

This time around, Charli XCX has a full band backing her up. It’s a great idea. Live instrumentation always gets the crowd going, more than rapping and singing over one DJ and some samplers ever will. The band is solid and they give the songs more character live. Not only does it make the concert better, it looks like it’s going to influence Charli XCX’s new record.

“Nuclear Seasons” comes up next. Great song on record, but then once Charli XCX and the band play this live, it really takes on a new personality. There’s the driving beat in the song that just becomes a call to action, getting the crowd to throw their hands up and go wild. A sea of upraised arms.

For “How Can I”, it sounded like the band dropped in a riff from a Sleigh Bells song. Doesn’t sound like it’s there on record, though maybe I overlooked it.

You can tell by the little details that Charli XCX really enjoys her fans and wants everyone to share in the experience. The band starts up “Black Roses” and Charli XCX starts singing a verse, then she stops singing and tells the band to cut the song. Oh no, what’s going on. Is she gonna throw a hissy fit of some sort and tell people to put away their phones? Or maybe go into a political speech about the crisis of aboriginal small people in the West Indies? (*not a real movement, yet)

None of the above. Charli XCX talks to an audience member in the front and apparently, she wanted to make sure this person wasn’t sad. Aww. That’s cool. After making sure there aren’t any sad vibes, she tells us she wants everyone to enjoy her concerts.

I wonder how she thought someone was sad. Were they mouthing the words, “I’m so sad”, really slow to her? Kinda like how you’d imagine hostages speak in code on their capture videos. (FYI: Charli XCX also accepts gifts from fans during concerts. See the fan in the link hand her some small packet in the front row. Pot? Or maybe potpourri. Bring brownies next time).

Introducing her next song as one she wrote for someone else, everyone knows what’s coming next. I don’t care, I love it! Yes, that song Charli XCX gave to Icona Pop, “I Love It”. Another song that translates well live. It’s got that propelling beat, stomp-like anthem quality going for it. Everyone loves it. They jump and sing back to Charli XCX.

She breaks out “Superlove”, her newest song, right after. Despite being released a little over a month ago, people immediately recognize it. There’s a call and response with the crowd that she tries out. It doesn’t quite work. Either the song is too new and no one knows the words, or we can’t quite understand the words she wants us to sing back to her. Not much response in the call and response. But the one-two punch of “I Love It” and “Superlove” marks the emotional peak of the night.

She closes with “Take My Hand” and “You’re the One”. After that, the crowd, of course, goes into chants for an encore. Charli XCX comes back and announces that she wants to try something special. Then, she brings out Chloe Chaidez from the opening band, Kitten. Chloe straps on a guitar and they burst into an old Jamaican reggae tune. Nah, it’s the popular 80’s hit “I Want Candy” (“one of the best choruses ever written…” according to her). She plays another tune and that’s the show.

A couple of takeaways from the show. All that time Charli XCX put into songwriting has paid off. At 21, she’s almost a decade into her career. Her list of accomplishments are starting to pile up.  She’s already written one of the year’s biggest hits, “I Love It”. True Romance contains a ton of songs that radio should jump all over. “Superlove” will probably break huge all over the world. You can already imagine it blasting from the clubs, at parties and in cars.

More importantly, she represents the next wave of female artists ready to supplant the Katy Perrys and Rihannas of the world. Charli XCX, Lorde, Sky Ferreira, Jessie Ware. Just some names out there whose songs will stick inside your head for the next decade. Sleep easy at night, pop music’s in some good hands.