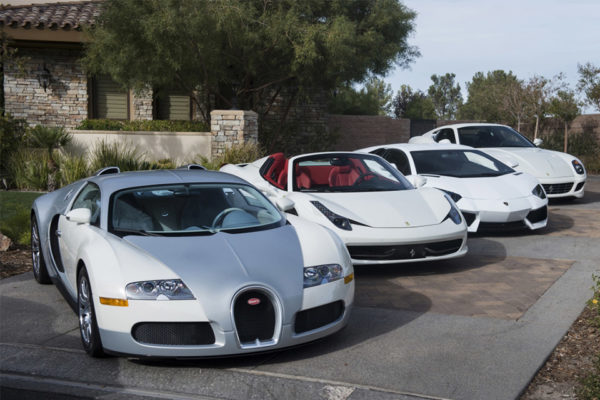 Floyd Mayweather won a close fight Saturday. We say ‘rematch’, but Mayweather will probably duck Maidana now. No matter what, he still got $30m just for showing up. That means a few more cars added to his already amazing collection. It all started with a 1996 Mercedes-Benz S600, the first luxury car Mayweather bought. And now…well, just take a look at his collection.

Lamborghinis, Ferraris, Rolls Royces, and Bugattis. Mayweather has them all.

Most of his cars come in white, but he’ll throw in a silver Bugatti once in a while.

Don’t forget the Rolls-Royces. He dropped $300k on a Rolls-Royce Wraith right after the Canelo Alvarez fight.

Gotta have the fur-covered seats!

If only Mayweather would stop avoiding Pacquiao.