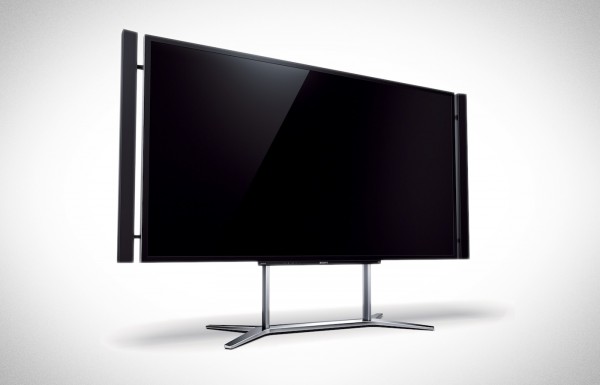 The 4K revolution may be in its infancy, but Sony is banging on the crib bars with the newly announced XBR-84X900. It’s Sony’s first TV ever with 3,840×2,160-pixel resolution (four times as detailed 1080p), and it’s also the biggest Sony screen to date. The edge-lit LED-based LCD display features passive 3D (also a Sony first) and a detachable 10-driver stereo speaker system lets you rumble the living room with sound. This way you don’t have to listen to that brat whine about “being hungry” and “needing a diaper change.” Kids. 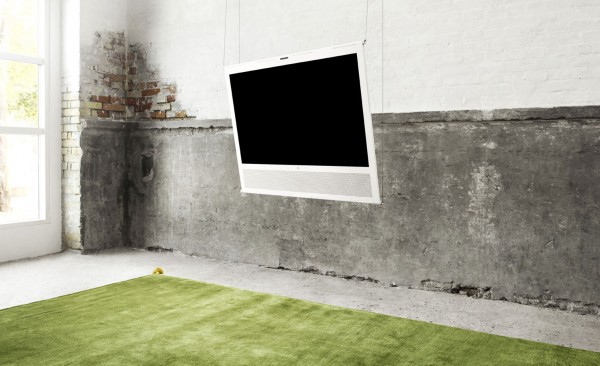 While the name Bang & Olufsen may get you thinking of sexing up Mary Kate or Ashley, home theater buffs know B&O is has a rep for high-end products with great sound. Their new BeoPlay V1 TV continues that tradition. It offers some unique mounting options – floor stand, upright table stand, wall bracket and ceiling bracket – and B&O’s proprietary ICEPower amplifier creates 5.1 surround sound that’s powerful enough to fill a room. Fire up the Full House and Baby Beluga, dude. 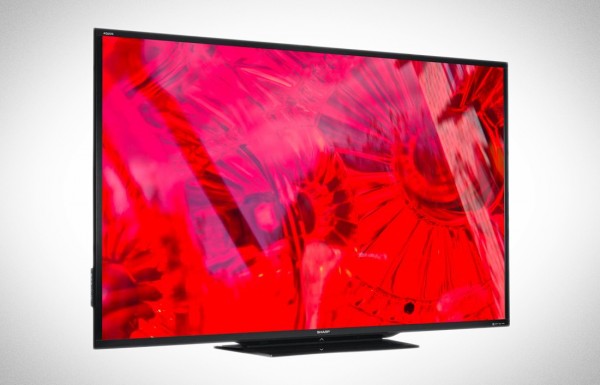 Can you imagine bringing retired NBA star Yao Ming into your living room, fastening his 7’6 body diagonally to your wall, and then sitting down to see what TV shows he could mimic? Sounds like a hoot, right? Well, I’ve got some good news and bad news. The bad: Yao isn’t down with that. He says it’s “beneath his dignity.” The good: You can now buy a TV his exact size! The 90″ Sharp LC-90LE745U ($10,999) is the biggest LED TV currently in production. It’s got your built-in Wi-Fi, NetFlix, Vudu, and 3D capability, but most importantly it gets you Yao’s length without all those complaints about his pride, etc. 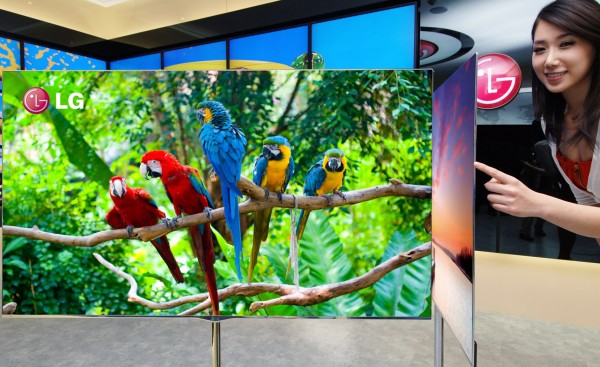 Despite the unveiling of tablet toasters, wireless wires, and other 22nd century stuff at CES 2012, it’s been TVs, yes, televisions, that have generated a giant slice of the buzz. The buzziest? LG’s 55-inch 55EM9600, which looks like it will be the first sizable OLED TV on the American market. OLED stands for organic light-emitting diode, and it represents yet another step forward in terms of picture quality and form factor. This TV is so thin, you can’t even connect your components to it–a separate control box will host all your inputs and connect to the set with one proprietary cable. When it gets released sometime in the second half of this year (price unknown), the 55EM9600 will feature streaming and social media, the new Magic Motion remote with “four modes,” including a built-in mic, and passive 3D. Scope out our CES coverage, including shots of the LG 55″ OLED TV, here. 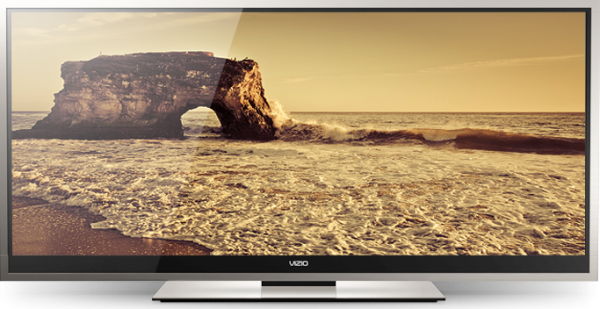 21:9 is not only the ratio of guys to girls at every party you’ve ever been into, it’s also the aspect ratio that Vizio is about to unleash on the American TV-buying public. CinemaWide is what Vizio is calling their new premium collection of LCD sets which will allow most movies to be displayed without those pesky black bars. 50, 58, and 71-inch sets will be available, with edge-lit LED backlighting in effect on the two smaller sizes. Toss in active shutter 3D, and really, is there any reason left to step foot inside a movie theater? I mean, if it makes you feel better, when you grab a soda out of your fridge, throw a $5 bill out the window–now you’ve got the true movie theater experience. 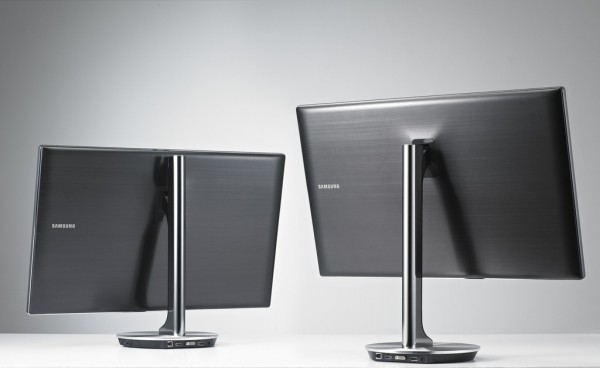 Did you really think display technology would stop with the invention of flat panel high def screens? If you did, then hold onto your mutton chops, because Samsung has a handle on the envelope and they’re determined to push it. Unveiled in the flesh at next week’s CES will be the 27″ Series 9 high-definition display, offering 2560 x 1440 resolution, which means Samsung can call it a quad-HD monitor, due to its ability to show four times more resolution than standard HD. With not much more room to innovate in terms of flatness, Samsung has kept the funky hanging design it used in last year’s SyncMaster T27A950D. You get built-in speakers, a pair of USB 3.0 ports, and DisplayPort, Dual Link-DVI and HDMI video ports for $1,199. 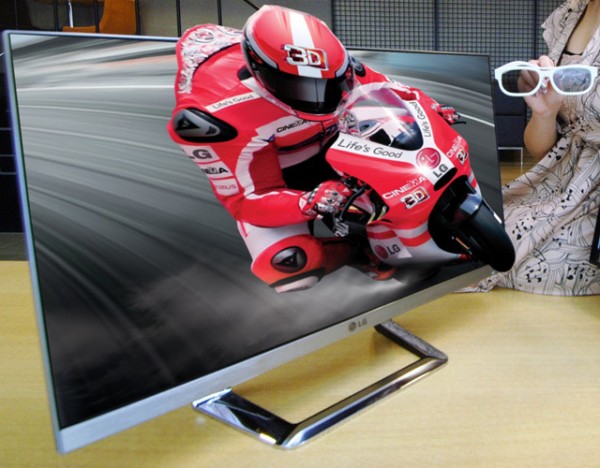 You can deny the notion that Ryan Seacrest deserves to host Dick Clark’s New Year’s Rockin’ Eve, but you can’t deny that LG is leading the 3D charge. The latest proof: the DM92 monitor, a 27-inch e-IPS 3D display with an angel hair-thin bezel. How thick is angel hair? LG says it’s just a millimeter on three sides of the display. Delicious. The full curtain will be pulled back during CES next month. 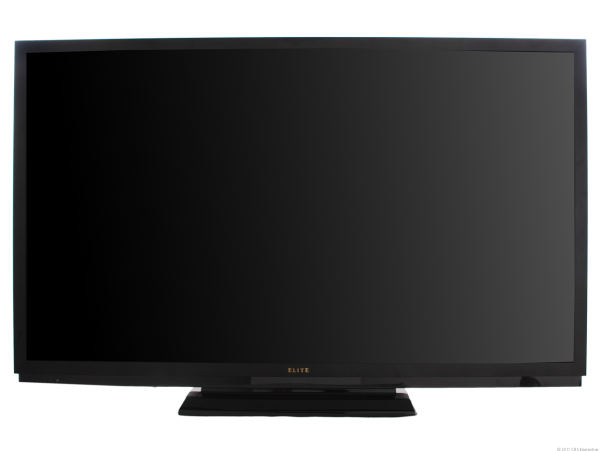 There is a new king of the picture quality hill, and thy name is the Sharp Elite PRO-60X5FD. If you need to see the whiskers on your local TV news anchorwoman’s face with stomach-churning clarity, this is the display you’ve been waiting for. This 60″ LCD LED  goes for about $4,500, and it’s currently the cat’s meow among hardcore videophiles. It features full-array LED backlighting with local dimming; 3D technology with active 3D glasses included; built-in wi-fi; and a 120Hz refresh rate. Colors are astoundingly accurate, black levels are blacker than the Grinch’s heart (pre-conversion), and its energy efficiency is impeccable. Although we imagine you’ll save lots of energy when you turn off the TV to avoid those whiskers. Eesh.